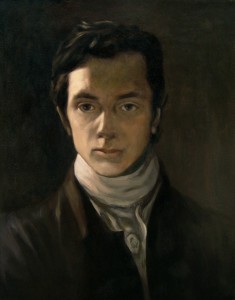 Jaggeresque: William Hazlitt’s Self-Portrait (1802) is the first in the series and reminds one of the early 60’s rock and rollers, with its pouting expression and sense of purpose

In his essay on Nicolas Poussin’s landscape painting ‘Orion’ Hazlitt describes the work in this way:

‘Nothing was ever more finely conceived or done. It breathes the spirit of the morning; its moisture, its repose, its obscurity, waiting the miracle of light to kindle it into smiles; the whole is, like the principle figure in it, “a forerunner of the dawn.”

‘The same atmosphere tinges and imbues every object, the same dull light “shadowy sets off” the face of nature: one feeling of vastness, of strangeness, and of primeval forms pervades the painter’s canvas, and we are thrown back upon the first integrity of things.’

This phrase, ‘the first integrity of things’ is a key to understanding the demands of taste that William Hazlitt made of his contemporary artists, and demonstrates the critic’s value system as a taste-maker of the late Romantic period. Hazlitt was not a critic so much as a fan-boy, the first blogger.

His essays are not written for the detached literary class, but for the ordinary reader, and are in themselves works of poetry, and painting in language. He makes few arguments, but tries to render the significance of the experience in the form of journalism. His work preempts the New Journalism and Gonzo movement by nearly two hundred years.

A small exhibition outside Tate Britain’s Blake Room, is a humble but informative attempt to show the influence Hazlitt had on the sensibilities of his time, and the relationship he still has to his age.

John Keats attended lectures on poetry by Hazlitt, and this same ‘first integrity of things’ must have informed Keats’s own views on the role of poetry, and his famous insistence on ‘negative capability.’ Experience, not the abstract mind, should be given priority, precisely because it is primal, or, as in the quote above, primaeval.

The first picture in this small but insightful exhibition, is Self-Portrait (1802), by William Hazlitt himself. Hazlitt was a painter in his own right, and devoted himself to it before becoming a full-time writer. Alongside the painting there is quote from his essay On The Pleasure Of Painting, in which he says: ‘In writing you have to contend with the world, in painting you have only to carry on a friendly strife with nature.’

Once again, Hazlitt’s skill as a writer shines through here. ‘A friendly strife with nature..’ could be the very core of what Romanticism meant. It also chimes with ‘the first integrity of things’ in the sense that all forms of idealism and conceptualisation and sentimental fantasy should be rooted out of the artistic process and the aesthetic as a whole. To be true, the painting must not shy away from the roughness of life, must not be too convenient and comfortable.

However, the strife is friendly. Hazlitt describes painting the way Keats talks about the poet’s craft. It is a form of peaceful contemplation, while at the same time, meeting the facts of death and turmoil and disintegration with bravery and a level headed gaze.

That gaze is there in Self-Portrait, a Jaggeresque pout and a tense and determined fearlessness show us where Hazlitt’s self-image and his aesthetic theory meet. It reminds one of the early pictures of Bob Dylan, or the back page photos of young writers. ‘By way of introduction… watch out.’

The painting is resonant of JW Turner’s own Self Portrait (1799), housed downstairs in the Tate as part of its permanent collection. Though Hazlitt’s seems more serious, more crafted and bolder. For Turner, painting a self-portrait was not something to labour over. For Hazlitt it’s a shot across the bow to the literary and artistic world. It’s the face of a self-conscious revolutionary, and it depicts the glassy stare of someone not content with the shadows. The light in fact, cuts across his face, revealing the grey-blue pierce of his eyes.

Having said all that, the very form is incredibly polished and his care for line and subtlety of colour is remarkable for a man who chose to relegate painting to a therapeutic hobby.

The contrast between the abrasive personality jutting out of the painting, and the smoothness of its crafted execution, embody Hazlitt’s paradoxical brand of Romanticism. Simultaneously purposefully destructive and anti-idealistic, but displaying a great faith in, and towards, nature.

Hazlitt is one of the first rebels, a precursor of Oscar Wilde, and that glint in his darkened eye is more than a little Wildean. But it is not nihilism that drives Hazlitt’s demand for ‘gusto’ in his own work and that of other painters, it’s a belief in the power of unfettered beauty, the beauty of anguish as much as the beauty of love.

Benjamin West’s Lady Beauchamp Proctor (1778) and James Northcote’s Young Lady Playing the Harp (1814) are explicitly exhibited side by side to show the contrast between Hazlitt’s loves and his hates as a critic. Excerpts from the Encyclopedia Britannica entry on Fine Arts that Hazlitt penned, articulate this contrast even further. West, writes Hazlitt, paints with a ‘total want of gusto’, and his human objects are purely idealised. They are not real people, but ornaments. West paints faces that are ‘nothing but bones and cartilages’, with no real emotion, only abstract references to sentiment.

Northcote, however, captures the life, the buried and unsaid emotions of his subjects. The ‘Lady’ playing the harp is still rather a sentimental soul, and reminds you of some of Dickens’ depictions of women characters. Having said that, she is real, and her eyes tear up with inspiration and wayward, unwanted thoughts of grief and other times and places. What hits you first is the emotion, not the form.

Sir Joshua Reynolds was everything Hazlitt despised in painting, and the quote that sits beside the great Academician’s Infant Samuel (1776), shows that the critic regarded Reynolds as overrated and pretentious, trying to shovel into his paintings significance that wasn’t there by giving them biblical titles. Hazlitt would have found this irritating because authenticity is where art and beauty get their moral force, their ability to remind us of the transcendent.

The Rake’s Progress (1735-1763) by William Hogarth features as an example of work that Hazlitt admired for its fullness of life. Plate 8 from the series is pitted against The Blind Fiddler (1806) by David Wilkie. Hogarth is the superior artist, because his characters are alive. Nowhere, Hazlitt claims, do we find Hogarth reaching and stretching for an idea. He does not labour for a moral or a meaning, but lets the faces of real people do the talking. Wilkie’s painting, however, is a carefully crafted theatrical piece, and Hazlitt charges Wilkie with creating for no other reason than to paint a moral tale.

Hogarth’s work is filled with natural humour. Wilkie’s takes itself too seriously, and whatever joke exists adds nothing to the power of the work. In short, Hogarth depicts real life, gusto, the soul of men. Wilkie’s work is a kind of lifeless nativity, an earnest but overly polished attempt to render an idea of humanity on the canvas.

The painting by JW Turner (he’s everywhere right now), Apullia in Search of Apullus (1814) also features alongside criticism from Hazlitt. Hazlitt believed that Turner was unquestionably the greatest painter of his generation, and presumably he admired the master’s furious, emotive emphasis on turmoil and the sublime. Surprisingly though, Hazlitt is critical of Turner’s technique. He recognises Turner’s ability to capture the beauty and spiritual power of colour, but his use of line, for Hazlitt, leaves something to be desired.

In Apullia, we do see some of Turner’s weaknesses in the depiction of human forms. But the woodlands in the background act as a bit of a counterexample to Hazlitt’s claims here.

Hazlitt, for all his distaste for Wilkie’s moralising, charged Turner with being a bit too ‘style over content.’ Unfair perhaps, but it is an important insight into Hazlitt’s standards for art. We must not force the truth onto reality, but we mustn’t neglect it either.

Bertrand Russell once said of the Romantic movement that it raised the ego as the measure of highest human achievement, and thus set the scene for an age of tyranny, anarchy and despotism, as well as a destructive moral relativism.

‘By encouraging a new lawless ego Romanticism made social cooperation impossible and left its disciples faced with the alternatives of anarchy or despotism.

‘Egoism at first made men expect from others a parent tenderness but when they discovered with indignation that others had their own ego the disappointed desire turned to hatred and violence. Man is not a solitary animal and so long as social life survives self-realisation cannot be the supreme principle of ethics.’

Hazlitt’s theory of aesthetics, though never made explicit, rubbishes Russell’s claims here. Russell was trying to foist the ills of post-industrial modernity onto those who sought to reconnect art to the human spirit.

This is a rather typical, Victorian misunderstanding of the Romantic movement, which, we know, is not a historical monolith. By emphasising emotions, and ‘the first integrity of things’ the Romantics were not heedless revolutionaries. The dogma of Robespierre, or Marxist totalitarianism, would have been repellent even to the hot-headed Prometheus of Percy Bysshe Shelley.

Hazlitt’s Self Portrait, and his reaction to Turner’s Apullia, indicate a subtlety, and even a a paradox, at the heart of the Romantic aesthetic.

John Keats was famously sceptical of poetic form as an avenue of study in and of itself, but he wrote in strict, condensed stanzas that give his greatest poems the mark of something eternal. Similarly, Hazlitt raises up ‘gusto’ and the ‘first integrity’ of life as the highest goal of the artist. But Hazlitt detested formlessness, and the sacrifice of meaning and content, for the sake of style.

That, in fact, was what he hated about the high art of Reynolds, as much as he had reservations about the emotional outbursts of Turner.

Romanticism was not an attempt at creating a lawless ground zero for the human soul to run rampant. In fact, the Romantics saw the worship of science and industry as doing exactly that. Beauty was itself a moral force, and the artist, for Hazlitt, engages in a ‘friendly strife’ with nature, by which an authentic moral sense emerges, but is never imposed on the world.