Trump is a buffoon. Farage is a demagogic narcissist. Fascism is bad. Unaccountable power is bad. So what?

I see no need to join the chorus of people online sharing their outrage about things that are obviously wrong. So I don’t do it. The exercise frequently ends up in being one of self-congratulation and superior scoffing. 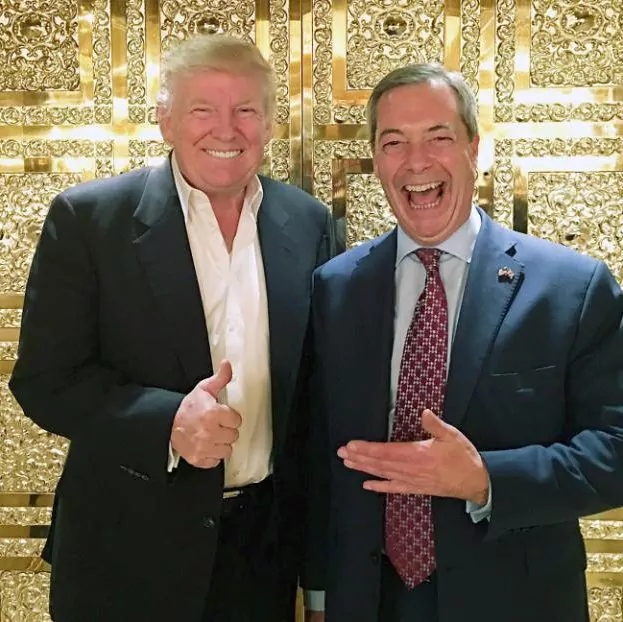 Far worse than even the bloody crimes of Hitlerism, are the crimes of rhetoric that allow decent people to become monsters in the name of supposedly “good” and “charitable” causes.

I know that I am the least enjoyable to be around when I am behaving like a boorish, righteous moron just because I know I have God on my side.

This is the state of the Left. Just because we fight for fairness, charity and equality, does not mean we are beyond criticism.

In fact, it means we deserve it more than the worst Rightwing fascists, because it is all the more difficult to see our faults as faults, and our crimes as crimes.

To those who say I don’t criticise the Right enough, and reserve my anger only for the Left, it is for the following reasons:

1. The Left depends more on consensus for legitimacy of argument, rather than disputation. The Right haven’t had a consensus since the fall of the church in public life.

2. Free speech is my biggest guiding value, and the Left seems hell bent of reducing this to some product of white supremacy and western imperialism. That’s horse shit, as the history of dissent and civil rights proves.

3. It is one’s duty as an independent mind to dissent from the opinions of your own side. That’s the only way you can trust the legitimacy of your views. It’s not about being contrarian, it’s about being committed to truth.

4. I know the face of the fascist Right, and I admit, I have underestimated its power in the last year. That said, I genuinely believe the Left’s ideological fanatics are a greater threat.

5. The danger of Left wing revolutionary fanaticism is that it really believes it has compassion on its side. The Right admit their love of hierarchy and divine right to rule, wheres the Left argue that their rage and violence is in the name of equality and good will. Nothing more worrying and threatening than that.

6. I believe the Left has forgotten its roots. It’s become about middle class people giving credibility to their bourgeois grievances. The ideological love of the EU is a great example. If people were really concerned with the working class they would know that globalism is a big threat to communities and social order, and it turns us all into “human capital” rather than human beings.

7. I see it as good practice as a Leftist to make my mind up issue by issue. I failed to do this in my younger years, and I was wrong. To be against fascism, the best weapon is reason, not ideology.

8. The Left failed in its response to the France massacres over the last year and half. The reluctance to hold Islam responsible for the fanaticism of its current factionalism, is fake compassion. I notice that many on the Left don’t give Catholicism the same free pass.

9. I have changed my views only in so far as I no longer believe western democracy and constitutional values (equality under the law) is the product of, or necessarily connected to imperialism. I notice that many on the Left still cling to this conflation. In truth, the constitutions of western liberal democracies are the only things standing between the world and tyranny, however flawed, corrupt and war-mongering their supposed advocates have been.

10. I don’t and never have actually, subscribed to Marxism. What little I have read of Marx, I respect him the way Muslims respect Christ, not as The Prophet, but as one among many dissenting philosophers whose voices were needed to end aristocratic tyranny.

I am an Oscar Wilde, William Morris leftist, and I believe beauty is truth and truth is beauty.

I am a classical liberal, and to say that does not make me a conservative. Far from it. Nor does it make me “alt-right”.

If the only way you assess someone’s progressive social conscience is by whether they virtue-signal, and rant against Trump and Nigel Farage or not, then you have a very simplistic view of politics. Politics becomes just a fashion statement.

There are plenty of issues that I don’t talk about online. Plenty of things I feel very passionate about, that I don’t feel the need to profess.

From the decline the Scottish fishing industry, to the justice system in Pakistan, I have many things I care about, but am not able to contribute anything change-worthy to.

The Left’s shift of focus to identity politics endangers public life itself. If we can’t disagree with each other, we don’t have a society.

This is a battle that I not only want to fight, it’s the number one battle I know I am fit for. I know I have the tools and the skills, the ideas and the passion enough to defend liberty over ideology.

There are many other battles worth fighting, and many other liberal issues to shout about.

However, this is the one area in which I know I can have the greatest effect. If I seek to challenge the seductive, intoxicating virtuousness of ideological thinking, then I am making the world a better place in the only way I have a hope of doing so.

I can’t get rid of the Trumps of this world. Neither can you. But we can stamp out the desire for simplistic political causes among ourselves, and thereby hold public life to a higher standard in the process.

Unlike other protest songs, or songs of social conscience, it convinces the listener that the most ironic, intelligent and worldly way to think is not to be weary and fatalistic, but to live with faith.

A young folksinger, the cliché of the guitar-carrying troubadour, walks into a bar in Nashville with “a stomach full of empty and a pocket full of dreams”, and a man buys him a beer and sings him a song.

The song tells him not to waste his time preaching to those who don’t want to hear his words, to avoid the pain and heartache of dedicating your life to writing and performing in the hope of communicating a message to humanity.

The song is characteristic of Kristofferson’s writing style at the time, and the song-within-a-song that gives his voice its trademark dimensionality.

Kristofferson’s songs are both simple and complex. They are still three cords and the truth, but there is a competing argument, a ballad-like conversation in many of them.

The talking blues vs the corny chorus-like verses give this song a woven texture, as if it is ten songs all in one.

The narrator tells us of a time when “loneliness was more than a state of mind”. That is, in a world of failure and ridicule, where isolation becomes a way of life rather than a passing inevitability.

When the next verse comes around, the narrator mirrors the words of the stranger and yet tells him he is not going to give up singing the truth, or trying to wake people up with a message.

“I’m not saying I beat the devil,” says Kristofferson, “but I drank his beer for nothing.”

The devil is obviously the stranger. And what gives this song power is that the voice of the devil is not evil. It’s not the whisperings of a maddened demon.

The devil’s words are sensible: You are just another voice among thousands, and many have come before you, and many will come after you.

But the hero of the song simply drinks his beer and listens, smiles and carries on his way.

This is a song about faith. About how being sensible and paying attention to the facts on the ground are meaningless when you are driven by a calling.

Kristofferson’s song succeeds where others fail, because the hero comes off wiser and more insightful than the devil, despite the stranger’s apparent battle-tested wisdom.