Marlon Brando’s performance as Mark Antony in Julius Caesar (1953) is his most dangerous and seductive, far more so than even his portrayal of Stanley in Streetcar Named Desire.

What gives the character edge is the fact Brando was pushing himself outside an already pretty wide acting comfort zone.

Though he had swallowed the New York stage and spat it back out again, he had never done Shakespeare. 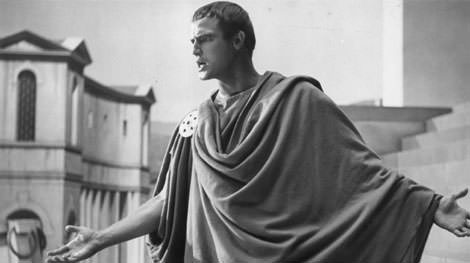 In fact, he was highly critical of his ability to carry off Mark Antony.

In his autobiography Songs My Mother Taught Me, Brando felt that he was too American for the role, didn’t have the natural rhythm in his DNA.

He learned Shakespearean acting from John Gielgud, basically on the go.

Gielgud, who plays Caius Cassius in the film, recalls Brando asking him for advice, running lines past him between shots on set.

Gielgud was charmed by Brando, not only his natural talent, but also his respect for the text and his commitment to learning.

Though it is more than likely that Brando had seduced Gielgud with his handsomeness – Brando loved Shakespeare and had an insatiable desire to learn new things.

The Brando myth is built in large part on this performance. Though his prosody is perfect (no false end-stops, no ham-fisted poignance), he brings his own glorious schizophrenia to the part.

The classic funeral oration shows Brando’s Antony at his duplicitous but sympathetic best, buried rage wrapped up in a deadly statesmanlike poise.

However, it is the earlier “dogs of war” speech that marks out the performance. It is exhilaratingly violent, and shows Brando’s incredible ability to navigate the extreme range of human spiritual force in the space of split-seconds.

That both deep-rooted love of humanity and narcissistic rage existed simultaneously, and in the same emotional space, for Brando, made him a perfect actor for Shakespeare.

What is tragic is his own disdain for his abilities in this style, and indeed all areas of acting. Brando knew he was good, but didn’t believe he was a genius, and refused to believe that any such gift was of worth to the world.

Recalling his speedy education at the hands of his mentor John Gielgud, Brando describes his performance as Mark Antony as “asinine”.

He really believed he was the fumbling American, that he didn’t belong.

Brando’s ambivalence to his own craft is famous, but its psychological roots cannot be explored enough. The wounds and self-hate that stopped him from taking on Shakespeare, and in particular Hamlet, make it a tragedy for all of us.

It is a shame that Brando excluded himself from both the stage and further experiments with The Bard. That said, we will always have Julius Caesar!