The Oresteia is Aeschylus’s epic trilogy written to win the hearts of Athenians and to fight for the very soul of civilisation.

Aeschylus meant business when writing this three part play – he was not just demonstrating his prowess as an artist. 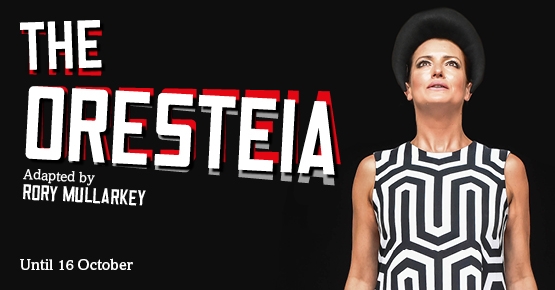 Aeschylus articulated the importance of humility in the face of social institutions, and the superiority of the rule of law over vengeful justice.

The story is not just polemic, but a terrifying, subtle and ironic study of human nature and the battle between reason and hubris.

Rory Mullarkey’s condesed, three act adaptation, now showing at Shakespeare’s Globe, spares us none of the political thought, the brutal tragedy and the Athenian polemic.

Mullarkey’s version however, is fast-paced, witty, and hilariously entertaining. This is not po-faced classicism, but people’s theatre, with all the muck and crowd pleasing populism of the Dionysian round.

Adele Thomas is the director, giving Greece’s greatest play a sparse and uncomfortably raw atmosphere. There is no clutter. The Globe’s corinthian columns are boarded up by mismatching boards. Nothing upstages the beautiful language of the actors and Mullarkey’s adaptation.

The use of the Chorus is key to the play, tugging the momentum along, and creating a relationship between the difficult material and the modern audience.

Dressed in 1940s wartime outfits, the Chorus act as the uneasy moral conscience of the audience, as well as the petrified Athenian crowd. This marrying of the old with the contemporary plays a huge part in the ultimate impact of the play.

George Irving, who plays both Agamemnon and Apollo, is a stunning actor with powerful presence. It is his appearance, clothed in battle blood, that marks the plays shift into grandeur and tragedy, after an ironic and comedic opening by the Chorus.

Irving plays Agamemnon as a Marcus Aurelius character, a wise and war tested general who respects his people and is suspicious of praise.

Irving’s gravitas as an actor make him likeable and commanding, a classic, Shakespearean quality, and you really feel an actor like this captures the brilliance of the Globe theatre.

The same balanced and fatherly wisdom is captured in his portrayal of the god Apollo, who acts as Orestes’s defence in the Eumenines (the third act of tis condensed version). Apollo is confident in his poise and balanced righteousness, but he is not without his godly fire.

Some of the most misogynistic lines come from Apollo:

‘Because his father’s blood takes precedence

The mother’s just a vessel, her warm womb

And when the child’s born it is its father’s

It takes his father’s name. It joins the line.

The womb is nothing. Just an empty space.’

The whole defence of Orestes rests on this. That To kill a woman is less important than a wife killing her husband.

Gasps peppered the tourist crowd in the Globe, and the Mail Online, Sasha Fierce ideology gave off a palpable suppressed rage at the language of the play.

To apply a feminist interpretation would have been ridiculous, however.

The point of Apollo’s defence is not about gender, despite its clear preference of the male. The point is there was reasoning in Orestes’s actions, and only revenge in Clytemnestra’s.

Katy Stephans as Clytemnestra is downright terrifying. She combines a Berkoff-like stylism with bloody minded horror, to show the bubbling revenge under a thin veil of the dutiful Queen image.

As Queen and host she is a prickly, jagged wand uncomfortable stage presence, showing a limited, repressed range of emotion.

As vengeful wife she is an unhinged apparition, a blood soaked monster, impassioned and nightmarish. The two faces of Clytemnestra are performed perfectly in a sinister dance of confusing messages, that make the audience shuffle uneasily in her presence.

Joel MacCormack’s Orestes takes a while to grow on you. This is a far cry from the god-like Achilles, or the strongman Greek hero of Odysseus.

MaCormack brings a boyish naivety to the role, but it is this quality that gives his performance a dynamism which carries the energy of the play.

He’s a little bit like Branagh’s Hamlet, rushed and excited, pure-hearted but restless. But there’s no inner turmoil on show, no bellowing angst. MacCormack moves around the stage like a dancer, light-footed and brisk, and his emotional energy mirrors that.

He’s a modern Orestes, believable, subtle and lacking dramatic outbursts. Even in his moment of blood covered murder, he’s workmanlike and dutiful rather than heroic.

MacCormack and Stephans share the play’s most powerful, meaningful and brilliantly executed scene, as Orestes finally confronts his hated mother.

Clytemnestra pulls all the emotional strings of a mother faced with an angry and embittered son.

MacCormack wrestles with the conflicted struggle between primal need for mother and the desire to claim justice. As Clytemnestra bares her breasts to MacCormack, the same breasts that suckled him in his soft-bellied infancy, Orestes realises the full, brutal horror of what he is about to do: kill the woman who gave him life.

MaCormack’s youthful purity of heart comes into full effect in this confrontation. Clytemnestra’s killing of Agamemnon was blood-lust, vengeance and the consummation of long-nurtured hate. Orestes’s killing of his mother, an otherwise horrifying violation of the gods and nature, is reluctant and ultimately reasoned.

‘How will this end? I am a charioteer

Careering with mad horses towards a crash.

My Mind has sped ahead of me, my heart’s

Hostage to fear, but while I still hold

The thin reins of control, while Wrath’s drumbeat

Has not yet seized my dancing soul, hear me:

I killed my mother not without justice.

Apollo’s oracle bade me do it:

It said I would be blameless if I did

And if I didn’t it promised punishments

As high as no archer could hit…’

This is not a play set aside for the curiosity of the hipster class, a play you sit through because it is morally incumbent upon you to do so.

It is fun, and moves at the hysterical pace of the best of Shakespeare, in short piercing scenes that make a point, disturb, lecture or make you laugh. There is a lot of wit in these plays, something that probably gets lost.

The irony exhibited by the cast and the use of the Chorus is extremely modern. It’s is easy to see Aeschylus as a reactionary, preaching a desperate return to the ‘old gods.’

It’s not that simple.

The play is an examination of justice as a concept, and the fragility of the social institutions that stand between human beings an chaos.

Aeschylus is a Hobbesian, but he’s no authoritarian. He simply examines the differences between revengeful justice and balanced, considered justice and the rule of law.

The real irony exists in the fact that although it is clear where the play stands on the problem of justice, Aeschylus appears aware that absolute, true justice, is impossible in practice.

This is not a play about Athenian utopia, but simply an argument for balanced social institutions over mob rule and tit-for-tat politics.