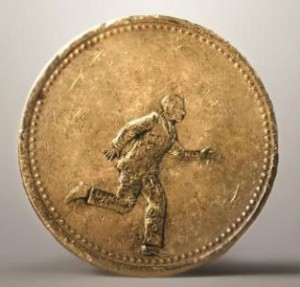 When you think of the city banking industry, your first thought is not likely to be stylised dance, underground theatre and witty comedy.

That’s exactly what RUN, a play about the lives of London’s city workers on the edge of breakdown, offers.

Ranging from biting satire to social commentary to heart warming laughs, RUN is an incisive and theatrically accomplished examination of the post-2008 banking industry.

Directed by George Evans, Jesse Fox and Simon Lyshon, the play is a remarkable piece of well-paced storytelling and creative theatre.

The characters of Carolyn, Lawrence, Tim and Ana struggle without success to foster friendships and meaningful relationships as they work long hours and suffer under the shameless exploitation of their seniors.

The group quickly descends into machiavellian backstabbing and passive aggression as insecurities and neurosis become the only fuel carrying them towards their tragic fate.

At heart, the play seems to be about ambition in general, rather than just the evils of the banking industry.

The issues of city greed, bank bailouts and being too big to fail are dealt with, but it is the human cost of the industry that forms the backbone of this brilliant show.

Each character seems to come from a familiar background. The ambitious of drive comes not necessarily from social pressures from but from personal hang-ups and a desire for self-empowerment.

The character of Tim, played with pitch-perfect sensitivity by Joseph Sentance, remarks during one scene that he is sick of seeing other people in his life forfeit on opportunities.

His character is an unlikely banker, who believes that the 2008 crisis was a social failure on the part of the banks. However, his desire to make something of himself seems to override his anxieties about corporate ethics.

Carolyn is played by Charlotte Watson, and the character is the closest thing to a main role in the play.

Carolyn is unlike the others in her group in that she went to Warwick rather than Oxbridge, and she comes from a religious background.

Her story is a tragic one and mirrors some of the worst stories to emerge from the banking world in recent years. A normal, intelligent and sensitive young woman is driven to self-destruction through her own desire for independence and success.

Charlotte Watson’s disciplined physical presence as an actor teases out Carolyn’s timidness and ambition in equal measure. She occupies the theatrical space with command and vulnerability, which contrasts with the text behind her character.

The result is a lead role played with effective and conflicted power, and which carries the moral momentum of the play.

Al Jarrett as the hapless posh-boy Lawrence brings much of the comedy. His comic timing hits home every time, conjuring an insufferably insincere but ultimately likeable ex-public school boy out of his depth.

If there is a bad-guy of the piece it is Ana, a Bosnian Cambridge graduate who plays the others off each other, and who barges her way into company favour at the expense of her peers.

Played by Gabriella Marguiles, this character is all the more effective for being a female one, showing that the darker and more consuming ambition of the banking industry is more than just excessive testosterone.

Even the arrogant and cruel Ana, however, is driven by a desire for self-empowerment. When Lawrence confronts her about her ability to remain cool under pressure, her eyes threaten to well up as she mutters, ‘it’s just a job.’

What’s striking about RUN is its lack of obsession over money. The play skilfully avoids Guardian columnist cliches about ‘the bankers’, and treats industry ambition with sympathy and irony.

The characters are written with depth and performed with subtle dimensions. The point is not a critique of capitalism, or the easy regurgitation of money-is-the-root-of-all-evil-type tropes.

RUN explores why normal human beings continue to put themselves through a sort of exhausting hell in a positively inhumane environment.

Rather than fall into judgement, RUN demonstrates why something like the 2008 crisis so easily happened. Simple insecurities and a desire to find affirmation and empowerment appear to be behind the ambition and lust for success.

RUN is a production by Engineer Theatre and the final show is August 31 at Pleasance Courtyard 13:15pm