Willie Watson walked onto the stage at Hackney Oslo with a tense, but quiet focus. Without any introduction he launched into Long John Dean and Mexican Cowboy, both highlights of his album Folk Singer Vol. 1.

There’s a strange sorcery at work in the pierce and squawk of his voice, reminiscent of the other worldliness of the Basement Tapes, but with its own intensity and fire. Watson’s is a voice that shoots out of him from a hidden dimension.

After his first few songs it became clear that Watson’s tense stage presence was more jet-lag and sleep deprivation than a discomfort with the venue or crowd. 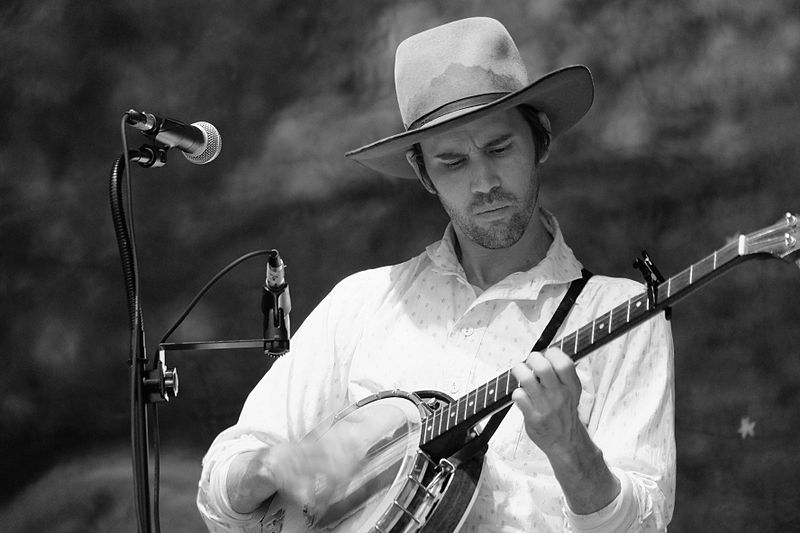 Willie Watson performs folk songs not as curious articles of history, but as energised and living expressions of the human experience

‘It’s nice to be here. Folks I’ve only had two hours sleep,’ he explained.

There was a disappointing crowd for a singer that had just flown in from the Newport Folk Festival in the USA. Despite a fast-growing fan-base in the States, Watson is not as well known as he deserves to be in the UK.

Notable songs were ‘Keep It Clean’ and ‘Rock Salt and Nails’, both of which appear on Watson’s album, but which took on a fresh life in concert.

These songs, and most of Watson’s brilliant old time repertoire, have biting lyrics, the hard words of an older age, when the opposite of love was not hate but violence. He delivers these lines with merciless precision, more than once drawing gasps from those uninitiated in the crowd.

Watson played a thumping, percussive and aggressive banjo style on songs like ‘Long John Dean’, ‘Mexican Cowboy’ and ‘Stewball’. His guitar picking was more strident than on the album too, with impressive, crackling flatpicking runs that ornamented songs but never over-dominated them.

For ‘Stewball’ he had the crowd singing along with him, in a Pete Seeger-style call and response. After teaching the crowd the lines, he wryly said ‘don’t fuck it up’ and blasted in with stinging banjo.

The crowd also involved themselves in his astonishing version of ‘Midnight Special’, which Watson performs with a fiery power and raw attack that not only evokes Leadbelly but seems to channel the master. At this point a connection was reached between audience and performer which appeared to put Watson more at ease.

His style is mysteriously arresting. This is no introspective ‘singer-songwriter’ or ‘acoustic act’. This is a folk musician who puts as much weight on delivering the psyche of a song as he does on musical proficiency.

‘Old time’ is often used to denote anything with a banjo or an up tempo stomp. Willie Watson embodies the true meaning of the term – the uncompromising, tough and heart-wrenching communication of complex emotions and ambivalence produced by struggle.

‘Kitty Puss’ is a prime and obscure example of this. On the face of it, it strikes the listener as a kind of nonsense nursery rhyme, but the final verse is of the ‘going-down-to-kill-my-old-lady’ variety, giving the naïve jauntiness of the song a chilling and sinister sting in its tail.

Americana is a term that has become accepted, but Willie Watson shows the inadequacy of the word. For Watson, folk songs are living, breathing entities, and his performance style has nothing to do with the posturing, distracted hipsterism that has become associated with the genre.

Watson jolts you awake, insists you pay attention to every line and offers little or no sugar to make the medicine go down. There is a constant joy, however, in the sheer power behind his delivery. But it is not the dreamy, trendy melancholia of what gets called folk now. This is folk because it is music intended for people, which treats its audience with respect, but which does not pander.

Like thunder, Watson’s voice and phrasings will echo in your mind long after the storm has passed. He’s an unforgettable performer, a craftsman who has paid his dues, and though he marks a kind of return to first principles, he also reinvigorates a tradition, showing not that these songs are modern, but that they are timeless.